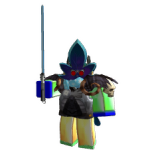 (This profile was work in progress, you)

Master of Summoner Tycoon, retired heister for Notoriety, Deleted Google+ Account due new crisis on Google systems, my ROBLOX profile will not be revealed until June 30, 2022 or 2030, Greater Veteran of Blood & Iron.

New untitled project: To Be Announced

Retrieved from "https://roblox.fandom.com/wiki/User:Trong_Browne?oldid=954676"
Community content is available under CC-BY-SA unless otherwise noted.