Hello, everyone! As the Roblox Wikia and Roblox gain in popularity, us administrators have dealt with some tricky situations about how to write about certain Robloxian rumors. You see, it's not as simple as just writing it. As thousands of people read our wiki every month, we want to keep it as accurate as possible. On the other hand, we do not want to be seen as spreading or starting rumors. I've talked earlier about using reliable sources when making edits to a page, and I want to go a little bit deeper into this topic and explain WHY.

The best way to explain is to think of a rumor that might have spread around your school. Did it end up being true? What happened when the rumor was being spread? How did the other person feel? Often, rumors are false, and in the end all they do is hurt people. Outside of the Roblox Wikia, there's even laws that prevent nasty rumors that ruin one's character from spreading.

The quote above can be thought of a few ways. Here on the Roblox Wikia, we see defamation occur when a statement is made that gives a player, game, or group a bad reputation. The statements often are not supported by any good resources and are like a crazy rumor being started. As more people share their Roblox account outside of Roblox, this could have some nasty consequences. If someone would say that a player is rumored to have broken the law, what's not to say that the person could be denied a job because of it? In the US (where the wiki is based out of), we could even be sued for what we write on the wiki, especially if it ends up harming the person outside of Roblox (libel).

With this quick definition of libel, it is certainly possible that the Roblox Wikia could get into some big trouble for what we write on the wiki. Often, we see issues where editors hear of a rumor and instantly want to tell the world about it, even if it ends up harming that player's reputation. It can be something as silly as a prank on the player to serious stuff like accusing someone of being a predator.

Even with "picture proof", we are super cautious about it. I'd like to show you some of the magic of photoshop and Inspect Element. With it, it can make it super easy for stuff to appear accurate, but really be false. Can you spot the difference in the picture? How about the next one? 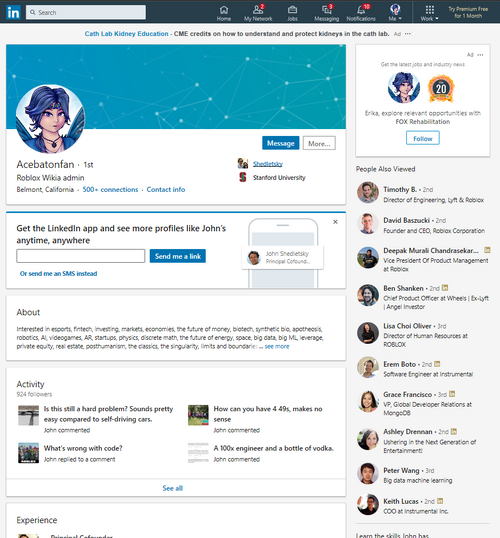 You see how easy it can be to make stuff look truthful, when it's photoshopped? That's why us admins do not like pictures as "evidence" for anything and why we do not like too many YouTube videos. When you think of it, all YouTube is are pictures, and there's no way for us to figure out how accurate they are. Even something like Waybackmachine can always be manipulated with inspectelement to look like something else.

Now when we get other "proof", we look at it on a case-by-case basis. First we try to figure out if it is true and easily accessible to others to confirm the truthfulness. We also look to see if posting the information could hurt someone's reputation (if it could, then we don't use it). We also look at other similar situations we have had and how we handled those so that everyone is on the same playing field. And when in doubt, we don't use it. We feel like it's better to be skeptical about everything than post something that's made up.

So in short, when making edits to a page, ask yourself one question: how would you feel if the stuff you're writing is said about you? It's simple, but a great way to help us make sure that we aren't spreading any rumors that can hurt other people. If you are unsure, you are more than welcome to talk to us about what you want to write and we can help you figure out if we think it is OK to include in the wiki. (PS: I hope you guys liked my photoshopping and inspectelement skills)

Retrieved from "https://roblox.fandom.com/wiki/User_blog:Acebatonfan/Wiki_Tips_102:Accusations_and_Legalities?oldid=779325"
Community content is available under CC-BY-SA unless otherwise noted.