Build It, Play It: The Island of Move

Roblox has teamed up with DC to bring you an all-new way to explore their incredible universe of characters, stories, and locations—starting with one of their most iconic Super Heroes, Wonder Woman!

Join Wonder Woman where her story began on the paradise island of Themyscira, train alongside the warrior inhabitants, and lasso up an epic collection of special rewards for your avatar based on Wonder Woman’s most iconic outfits and accessories.

Wonder Woman: The Themyscira Experience is a Roblox event which is sponsored by the upcoming film Wonder Woman 1984 which is set to release in December 2020. The event began on June 25, 2020 after being announced in a blog post[2] and will end on an undisclosed date. Soon after the blog post was published, the event's own page went up at roblox.com/sponsored/wonderwoman.[3] A part of the blog post claims that the event will be a "permanent addition" to Roblox, which means that it will likely not end soon.

An individual game was created for this game which resembles many locations from the Wonder Woman series. The objective for the game is to explore the large world in-game and complete quests the character gives to the player for Gold Coins. They can also be purchased with Robux. Gold Coins can then be used to purchase five actual avatar shop items from the in-game item stores. Three avatar shop items could have initially been purchased using Robux, but on July 3, 2020, they were updated to be able to be purchased for Gold Coins. Roblox has confirmed more event items are coming soon. On July 13, 2020, an official launch trailer was published to the official Roblox YouTube channel, although a completely different one was posted in the event's announcement blog post beforehand.

On June 25, 2020, the event game went public and the event officially began after a Roblox blog post was created regarding it.

On July 3, 2020, the event game received more updates. In-game graphics were improved, which causes the game to have more lag for many users. All of the items which could have been purchased for Robux were changed to be purchasable with Gold Coins, which was praised by players as items having to be purchased with Robux caused a lot of backlash and criticism (see the Criticism section). The Corrupted Rats mission was buffed to make auto-farming using an exploit harder and in general farming harder, as the spawn rates of the rats have significantly decreased. Now, the player has to talk to Aella to repeat the quest instead of both Aella and Artemis. The Quests GUI no longer shows completed quests. A sword icon also shows on the left if the player has completed the "Get Sword" quest.

On July 15, 2020, the event game was once again updated, this time introducing two new, repeatable quest involving mining ores in the Armory and another involving jumping in the ocean and finding pearls, and making certain items exclusive to certain shops. After this update, the Golden Axe, Lasso of Truth, and Diana's Hair accessories could only be purchased in the Armory; at the Oracle's temple shop, the player can purchase Silver Tiara Hair, Diana's Cloak, and the new Wonder Woman's Hair; and at the spawn shop, the player can purchase the Wonder Woman Shorts, the Wonder Woman Armor Silver, the Wonder Woman Armor Classic, and the new Wonder Woman Tiara and Wonder Woman Bracelets. Additionally, the UI was adjusted so that the icons for the "Get Sword" quest and the new "Get Pickaxe" quest were moved to the bottom of the screen, whereas before they were on the left side of the player's screen.

On August 3, 2020, the event game had its third update, introducing two new, repeatable quests involving digging holes and hunting eels with a spear. Additionally, three new items were introduced: Wonder Woman's Armor Advanced, Diana's Ponytail, and the God Killer Sword. New animations for killing rats, rat deaths, mining ore, and other quests were introduced, which made the game look visually pleasing. However, the developers buffed the health of the ores and rats, requiring the player to use their quest-specific tool four times to collect one resource, making the repeatable quests take much more time to complete.

On August 20, 2020, the event game had its fourth update, introducing a new repeatable quest invoving defeating Lava Monsters in the underworld. Additionally, three new items were introduced: Diana's Amazon Top, the Sword and Shield Combo, and Wonder Woman's Armor Skirt. New quests were introduced that allowed players to upgrade their pickaxe and sword, allowing them to fight the Lava Monsters and mine the massive gemstones found around the overworld map. Instead of doing only one damage per swing, upgraded pickaxes and swords would deal two damage points per swing. Despite the newly introduced tool upgrades and quests, it was not enough to sway players away from grinding for gold coins using the Find Buried Treasure quest, which rewarded 1,000 Gold Coins per every 10 treasure chests unearthed.

On August 22, 2020, the event game was given a small update that replaced the video normally found in the spawn area with a new trailer that Warner Bros. Pictures released the same day. No other changes were made to any of the quests or in-game objects, but a few of the problems involving some NPCs and the vine climbing section of the map were fixed, and the shops in the spawn building and the Oracle's Temple were each given one new slot, hinting that more items could be releasing soon. Although this update added nothing major, the game's player count spiked to over 2,000 players after its release and stayed around these numbers for a consider amount of time. This is likely because Roblox made a tweet , YouTube video, and event page about the new trailer, which made players join the game and realize that new accessories they had not yet collected were added to the game in previous updates, causing them to stay an extended amount of time to collect these accessories. Although the promotional content released for this update effectively caused the player count to increase significantly, the player count was back down to around 700 players after 28 hours. A month after this update released, the game's active player count greatly reduced to around 60 players, which is the result of a lack of updates or any new promotional content for the movie. Nevertheless, one final update is expected to release for the game soon, with five new "Upcoming Item" badges being listed in the game's badges.

This event was initially criticized for offering paid (Robux) prizes. It has been criticized for only having one repeatable quest. The rest can be completed and redeemed for Gold Coins in-game one time, but the Corrupted Rats quest is the only one which is able to be repeated. It has also been criticized for having a large map and many missions to complete. Overall, many players have found the event very time-consuming. Some players report that the game crashes on lower-ended devices. The game was also not available on mobile devices, however this has changed. Some quests may lead to be unbeatable due to a glitch such as the cave quest where the player has to break the walls. After throwing the cubes at the wall they would break and the cube thrown would despawn. However, missing a shot would lead it to despawn leading the quest unable to be beaten. There is another glitch where the player can not jump when attempting to complete the Corrupted Rats quest. If the player resets their character, they may sometimes have the sword and pickaxe GUI removed.

On July 3, 2020, the three items that were only purchasable with Robux were updated to become purchasable for coins. Despite this, there has been some criticism on Roblox's part for not refunding users Robux or Gold Coins who originally purchased the items during the time they were available for Robux. Many players found this change to make the event more time consuming because the rats started spawning at a lower rate, which was said to increase the difficulty. Many players may find servers full of players also trying to do the rat quest, making it more time consuming.

The following can be considered errors having to do with the event's game: 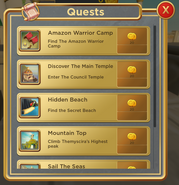 The coins counter the player has 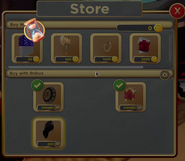 A player purchasing an item in the old item store

The tool icons for the sword and pickaxe

Retrieved from "https://roblox.fandom.com/wiki/Wonder_Woman:_The_Themyscira_Experience?oldid=1031068"
Community content is available under CC-BY-SA unless otherwise noted.